Yesterday, in the late afternoon, Mrs Columbo and I took the hound for her after dinner constitutional.  Walking down 15th ST NW, we took a common enough route along Rhode Island Ave, planning to circle back to P via 14th.

We were on the north side of Rhode Island Ave, directly across the street from Windsor House Apartments (1444 Rhode Island Ave NW).  I had the leash in my hand watching our dog to see if she would do her business, when Mrs Columbo said "what is going on over there" in a very concerned voice.

I followed her gaze to a first floor unit in the Windsor House Apartments just in time to see a young woman, standing at the window looking out,  Arms up as if banging on the window to get our attention, suddenly disappear as if grabbed from behind.

This was all in a split second, and the blinds on the window swayed back & forth blocking our view into the unit.

"She was calling out for help!" Mrs Columbo tells me, with great concern in her voice.

I'm proud to say my gut reaction was not of cowardice (I have a feeling if in a tight spot fear would have me on the flight portion of the "fight or flight" instinct).  Instead without a word (as my adrenaline level went into high gear) I threw the dogs leash to Mrs Columbo and ran across Rhode Island Ave to the Windsor House.

The blinds were still swinging so I knew exactly which window the girl had vanished from -- unfortunately the windows were above the parking ramp exit so I could not reach them to bang on.

I ran to the entrance of the Windsor House -- no one at the security desk.  I used the entry system to call management for the building -- no answer.

I ran back to the front of the building where Mrs Columbo now stood, with our hound, her eyes staring at the window.  The blinds still swayed a bit from the disturbance.  No more than 3 minutes had passed since we witnessed the event (attack?).  I had my phone out and was telling Mrs Columbo I was calling 911, at the same time I was looking for rocks to throw at the window.  Just as I was about to hit call on my cell phone, two young women appeared at the window, cell in hand, trying to get our attention and open the window to speak to us.

"It's ok, we're filming a movie!"  they yelled out.  They had obviously realized our concerns and didn't want their movie to become all too real with a visit from the police.  It took a while to come down from that adrenaline high.

On this same walk we discovered a new (new to us) bar on 14th street, Kingfisher, address is probably 1414 14th ST NW (next to/beneath Sav On Liquors).  PoPville had a nice write up almost two weeks ago. 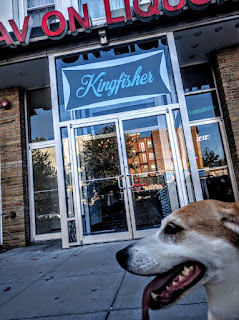 Mrs Columbo ran inside and was told they had opened on Thursday, grand opening set for early this week.  Below ground bars are tough for me to want to visit in August, but their appeal widens greatly come winter.

The Columbo's picked up and moved from Penn Quarter to Logan Circle. We're still dragging our dog around with us wherever we go.